Gone But Not Forgotten Blogfest 3/4/11 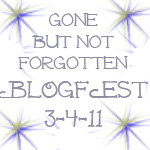 The Gone, but Not Forgotten blogfest is Erinn's brainchild. All we need to do is list our top five shows that no longer have new episodes being made.

OMG, this is the easiest blogfest ever!!
Really? This is much, much harder than you would think. There are so many ways to organize this list: cartoons, teen drama, childhood faves. My brain is exploding with the possibilities.

For example, Out of this World. I loved the show, do I miss it enough to see new episodes? Probably not*. What about Swans Crossing? If it could replace the current version of 90210, probably.

Alicia's Top 5 Shows That Ended Way Too Soon
5. Highlander. With 7 seasons, it really didn't end too soon, but the storyline faded away from the original premise. Technically, there can only be one and therefore the show shouldn't have been in existence, since Connor was the one. *deep breath* Sorry for the geekout. If they could go back to season 4 and redo the last 3, that would be awesome.
4. The Muppet Show. I'm talking about the original series. As a member of the Sesame Street generation, I love muppets. There were so many great moments on this show and watching old clips on YouTube still have me cracking up.

3. Dark Angel. Two season of this really wasn't enough.
2. The Powerpuff Girls. The show was cute and quirky.
1. The Adventures of Brisco County, Jr. Best. Show. Ever. Bruce Campbell as a Harvard educated bounty hunter looking to capture the people responsible for his father's death. Oh, did I mention it also includes sci fi and steampunk? AND Bruce Campbell?

Miranda's Top 5 Shows That Ended Way Too Soon
This is especially hard for me as well because Alicia actually picked a few that would have been on my list. But I'll try. Most of these are recent shows, I'm not going too old school.
5. Arrested Development. As I described it to a friend recently, it is comedy for smart people. The writing is superb, the way all the story arcs are tied together is amazingly clever, and it's just freaking funny! Even though the creators said they ended it when they wanted to and they did all the wanted to do... we all know it was just cancelled. Apparently a movie is in the works!
4. American Dreams. I'm not usually a fan of family dramas, but I really enjoyed this one. I used to watch it with my parents and it allowed me to ask all sorts of questions about the era since my mom was roughly the same age as Brittany Snow's character on the show. Cancelled with no proper ending. LAME.
3. Joan of Arcadia. Cancelled around the same time as American Dreams... cute show, more family drama... but just when they were introducing SATAN as a character, it got sent to Hell.
2. Pushing Daisies. Beautifully shot, cleverly written, and touching. Only having two seasons was a crime. I just don't think television was ready for such a smart show.
1. Buffy the Vampire Slayer. You have probably figured out by now that I'm a huge dork, and yes, I love Buffy. Seven seasons is a long run (and longer if you count the comic series for Season 8), and there wasn't much more to do. But I was still sad to see it end. I never followed Angel, but I wish they had done the spinoff "Ripper" that was supposed to be about Giles.
Don't forget to enter our race to 150 contest!


Lurkdom, what show do you wish was still on the air?


* Though I would do anything for Evie's power to stop time.
________
Last.fm hit of the day: Black Sunshine by White Zombie