The CDC Wants You to be Prepared!!

Zombie Thursdays is a weekly feature with guest blogger, Miranda. You can read more about her here.
With the Rapture fast approaching (remember, it is this Saturday, May 21st) and the possibility of the dead rising from their graves to create a zombie apocalypse, the CDC has posted a blog about being prepared for a widespread zombie attack.
YES. You read that correctly. The CDC, as in the officially government sanctioned Center for Disease Control. This is NOT a joke.
Well... sort of.
A few days ago, the CDC did, in fact, post an entry to their blog called Preparedness 101: Zombie Apocalypse. In it, it describes the steps a family or individual should take to be prepared for a zombie uprising... or more importantly (and realistically) a true natural disaster. I have to give the CDC credit for this amazing tongue-in-cheek blog! If you had any doubts as to the popularity and influence that zombies have on our culture and society, I'm pretty sure those can all be permanently laid to rest (with a bullet to the head) when you consider just how significant it is that a *government agency* is using the hype of zombies to attract Americans to their site to learn how to really prepare for an emergency situation. Of course, the CDC humorously uses brain eating zombies as an example, but they also throw in more serious emergency examples, such as floods, fires, hurricanes, or other disasters that really do affect Americans. 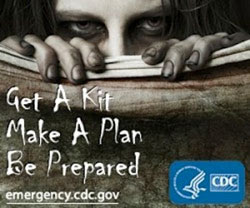 And, if you still have doubts about if this marketing ploy actually worked... after the CDC posted the blog link to their Twitter account, the amount of people trying to read the zombie information crashed the blogs servers. As of now, it is dead. But hopefully the type of dead that's only "dead-ish" and gets back up again. Unfortunately, I cannot post a link to the actual blog (it really is crashed), but someone was smart enough to make a Google-Cache of the blog, which can be viewed and read HERE.
Although the blog is missing pertinent information about how to kill zombies, it does give great information about creating emergency kits and an emergency plan decising what to do in a life altering situation. Make sure you are prepared and that your family knows where to go and who to contact in such an emergency!
And this Saturday, I'll be spending my day in quiet solitude and prayer. Okay, that's a lie! In reality, I will be spending the day at Chicago's Anime Central convention, the largest anime and manga convention in the midwest. I was lucky enough to be able to perform there last year for a crowd of 700 people! This year, I'm just going as a regular old con-goer. If the world doesn't end, I promise to report back to all about my convention weekend!
ads apocalypse blogging CDC marketing zombies