What's in a Name?

By Alicia Gregoire - September 02, 2011
First apologies for the rather lame title. It's been established that titling is beyond my realm of success*, not to mention it's Friday before a long weekend in the US meaning Weekend Brain has already arrived. 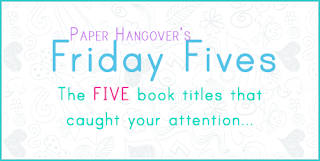 Back when the topic was book covers, I mentioned that with books the cover catches my eye more than the title. This doesn't change the fact that sometimes the title does win out. Some examples of purchases based off of title alone are...

So while covers rule supreme with attention-grabbing points for yours truly, titles really have to pop. No wonder I have such difficulty titling my own stuff.


Lurkdom, what titles--books or otherwise--have caught your attention as of late?

* Something yours truly is working on, but perhaps with less aid of the caffeine monster.
_________
Last.fm hit of the day: Everything Went Black by The Black Dahlia Murder
books Friday Fives lists titles