By Alicia Gregoire - October 21, 2011
Today's prompt from Paper Hangover is hard as hell. The 5 best ages of my life? I'm lucky if I can pick one because that's how I roll.

Yours truly can't remember much from my single digit days, though I think I had a decent year 5*, and we'll totally overlook the middle school years because that well and truly sucked. That leaves age 14 to present**, which I'll group into different chunks. This will include more than 5 ages, but I had too much fun collaging.

Because it's Friday, I'm going to rate the best ages based off of the fun-o-meter, instead of lessons learned. 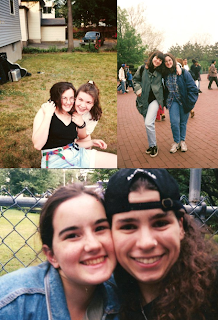 Even with the crap that sucked: the huge blowout with Bestie Danielle, the drama of liking the same boy as Bestie Michelle, and not knowing how to deal with hormones, I had a lot of great memories from this time period. I traveled without my family three times: Florida, DC, and NYC. I did a lot of stupid stuff and didn't get caught. I had fantastic hair***.

I had three major friends during that time period: Michelle, Danielle, and Amelia. Each friendship brought something different to the table and I grew a lot from being friends with all of them. (It's because of Amelia, the blowout with Danielle ended, which I'm eternally grateful.)

Also, this included my senior year, which was the best part of high school ever. It was either because I stopped caring or everyone really got over the clique and snobbiness thing. I was my most outgoing then, which totally helped making it a memorable year. First kiss boy and I were even back on speaking terms by this point. (Though you will notice he is missing from my collage.) 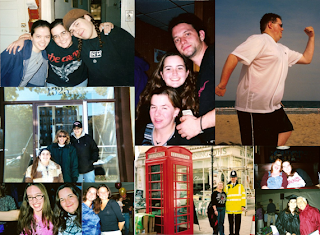 College, also known as the time of many exciting things and photographs****. Though I lived at home during college, I still managed to do a lot. I met Bestie Steph right away, my Aerosmith fandom kicked into high gear.

I continued my outgoing streak and auditioned for a play. The next five years I thought myself a thespian and focused more on Shakespeare than my writing. Once I realized that acting wasn't my thing, I moved towards the technical end of theater, which was better. I was single towards the end of this stage and crushed on way too many guys that I had no chance with and spent a lot of time in divey bars getting the stink eye from girls. The besties also found their future husbands during this time, which while awful for Single Alicia, was still awesome because those two guys are great and I love them both. 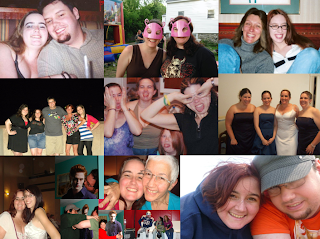 25 has been the best year ever for me. I met Hubby, started writing again--for real, and finally moved out of Chez Gregoire. Without seeing my mother every waking moment, this is the time I realized that she's hip.

I also had the best birthday party ever with a lot of my out-of-state friends coming in. (If you look closely, you'll see Miranda.)

This is also when a lot of family and friends were getting married. For some reason, this meant we had to act more ridiculous than we did in college or high school. So the second half of my 20s included weddings and a lot of ridiculous poses plus double the amount of concerts I saw in high school and college. (I became a bit of a music nut around 26.)

So this is my five best ages, which I guess is technically is about 6*****. What has been the best age for you so far?


* This might have everything to do with it being my final birthday party. Yeah, you heard that right.
** Which is 29 on repeat.
*** After the awful DIY perm of middle school, it was a miracle I had good hair left.
**** Many of which are incriminating and will never be seen on The Pie.
***** Disclaimer: you should know by now Math and I are not friends.
______
Last.fm hit of the day: Gravity Eyelids by Porcupine Tree
Friday Fives high school alicia life