Zombie Thursdays is a weekly feature with guest blogger, Miranda. You can read more about her here.
**Today's entry discusses mature themes and isn't acceptable for readers under the age of 18. So don't read on if you're underage or easily offended by sex or published smut. If you choose not to read on, go enter our Race to 150 Contest! It is kid friendly.**
Since most of the readers of 'The Pie' seem like writerly types and well-read individuals, none of you are shocked to know that a bunch of Borders bookstores are closing down. I don't really know anyone who doesn't have "their" Borders closing. Even the huge Borders on Michigan Avenue in Chicago, close to where I work, is shutting down. It's a sad day for book readers and buyers and even a sadder day for me because all those Seattle's Best coffee shops are closing and my company, Starbucks, owns them... and well, I'm about ready to sell my stock, so I need it to not go down. But that's besides the point of today's post topic-- ZOMBIE SMUT!
Yes, legitimate (okay, I use the word loosely) zombie published pornography of the written word variety. We've already explored how zombie sex is popular in film, but it seems even writers agree that the topic should be explored. So, while visiting her local Borders that was shutting down, my friend picked me up a very cheap copy of a zombie romance novel. 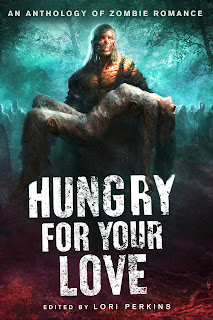 Enter on the scene the anthology Hungry for Your Love edited and compiled by Lori Perkins from a group(?) known as "Ravenous Romance." That alone should tell you the sorts of books they normally publish. Now, I'm not criticizing or blasting romance novels. I know they are very popular. And everyone has read some good and kinky smut in their day. But what I have read in this anthology... it's not really all that good. Good for a laugh maybe! It's hard to compare and judge "good sex" writing when at the same time I am currently reading Clive Barker's Coldheart Canyon, which may in fact be the MOST perverse Barker novel I have ever read. Perverse, but extremely well written, and, dare I say it, even some parts are kind of a turn on. But reading Hungry for Your Love and encountering lines like "a fleeting flash of her hairless sex" (which I can only assume means a waxed labia?) and "he...thrust into her, going balls deep" is just laughable. And not sexy. Oh yeah, and all the sex partners are zombies!
So, good things about this anthology-- there actually are some clever ideas floating around about zombie mythology. For example, in the story I quoted above, when they're not going down on each other, there's a unique concept that the zombie virus invades the host's brain, and while the rest of the body is decaying (like your traditional zombie), the brain remains intact and extremely active with all thoughts and memories of the previously deceased person. With the right amount of money and timing, you can transplant your zombie virus infected brain into a donor body of an individual who is brain dead, but alive, thus ending the body decay and giving your brain renewed "life." Rich zombies can shop around at body stores, or as the main character thinks, "Best Buy for the brain dead." It's a cool concept, and could actually make for an interesting story, removing the sex of course. 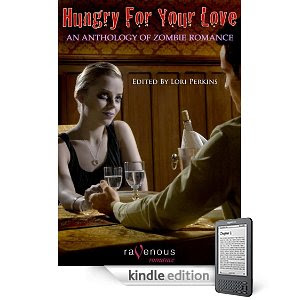 Another story talks about a Zombie Anonymous sort of meeting in which the zombies remind me of the characters in the Generation Dead series. However, they do talk a lot about how they have no pulse, don't have to eat or breath, and yet... the zombie man can have an erection and orgasm? I don't think so. Plot holes abound in this anthology, but it seems as if it was compiled on more of a dare than anything else (which is actually stated in the introduction, how writers claimed vampire romance was a sure thing, but you could never have zombie romance). I don't read a lot of smut, so maybe this is par for the course-- an unbelievable plot line (even ignoring the fact it is about zombies... we'll take that as plausible "fact") filled with useless sex with words like "throbbing cock" and "areolas." Who even uses that word in day to day conversation? Spell check doesn't even think it's real!
I won't say not to read this anthology, but I won't urge you to run out and buy it right now. I was laughing through most of it, including a Voodoo zombie story which was riddled with racial stereotypes and bad dialect. I don't usually read a lot of "bad" fiction, so I sort of live under the delusion that all published writing is good. Clearly, it isn't. But maybe I am too strict of a judge and require something a bit more intelligent to get my interest. However, I think it is an important example about the types of zombie fiction that exists, including zombie smut. And more power to them-- the writers and editor seem very excited that there is zombie smut. I'm a little excited too, I just wish it were all written by Clive Barker, as in Haeckel's Tale.
anthologies Borders Clive Barker pornography Reviews sex smut zombies